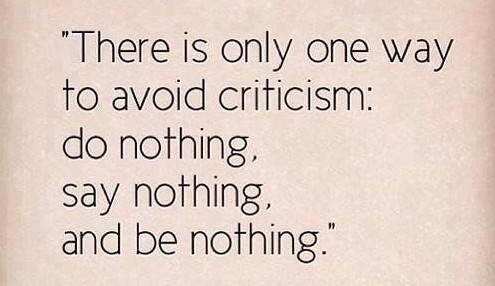 Kenneth Tynan provides the best description of a critic I have ever heard: “A critic is a man who knows the way but can’t drive the car.”

In Luke seventeen Jesus heals the ten lepers, but only one leper returned to thank Him, and Jesus was perfect! If Jesus had to deal with critics and ungrateful people then you and I will also. The only way to avoid criticism is to do nothing and be nothing.

Proverbs 12:19 - “The lip of the truth shall be established forever: but a lying tongue is but for a moment.”

We must be careful to never judge people by what their enemies say about them. The majority of the time critical people are either jealous or uninformed, and they say things that have no impact whatsoever upon the truth.

My dad has always told me that, in time, the truth will come out.

“It is useless for the sheep to pass resolutions in favor of vegetarianism while the wolf remains of a different opinion.” - Author Unknown

We must be careful in our lives to not allow criticism to hinder us from accomplishing the task that we set out to do. We must also be careful not to become consumed by the task of changing the opinions, or gaining the approval, of critics. People will always be negative. Some people will always hate. But the majority of the time it’s because they are jealous.

Jan 16
How to Encourage Yourself in the Lord

Trooper Glenn's Testimony Critics Things Are Not Always As They Appear